​Scope of the project

We considered “Voter” as our target audience and focused on the overall UI/UX of the voter dashboard. We concentrated on each page but gave special attention to the Actions page to provide more structure to the Actions list. Overall, we wanted to make the dashboard more delightful and intuitive to bring more engagement and excitement throughout elections.

We started off our research by analyzing everything about Motivote. The problem that we tried to solve was to make the dashboard more intuitive, social and fun by focusing on the UI/UX of that section.
We wanted to learn how the existing dashboard and teams currently engage. We would then leverage that information to fill in the gaps in areas that are necessary after conducting research. We hoped to find a solution for those voters who indeed want to motivate others throughout the voting process.We hypothesized that Young users want to go out and vote, but lack motivation to actually do so.

With this in mind, we made the following assumptions:

We began our process with conducting a survey to qualify candidates for our user interviews. By filtering through a survey, we were able to interview the targeted audience for our hypothesis. Being able to survey participants enables us to interview within an audience that we wanted to focus on relevant data and information. This prevents us from interviewing participants that would not have any use for our solution.After a screener survey, we conducted a user interview. Overview by creating questions that would help us understand the user's experience with the platform. After interviewing with 7 users, we wrote down quotes, behaviors, likes and dislikes from each interviewee.Then we grouped them into similar categories to visually see trends and patterns among the participant’s responses. 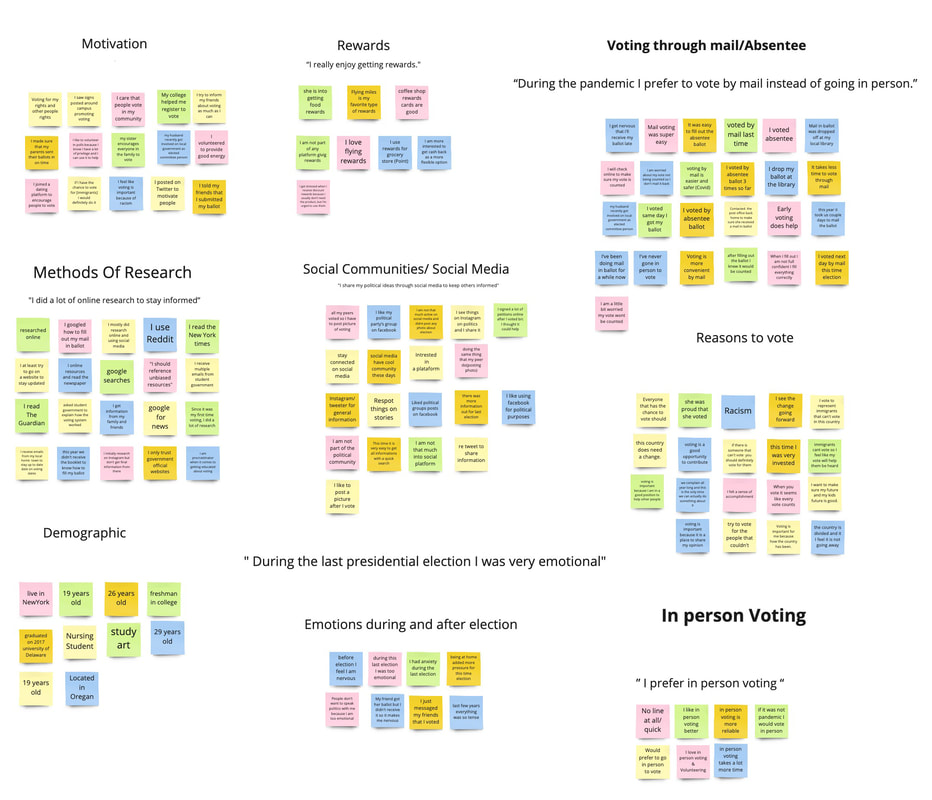 After synthesizing our affinity mapping we came away with these findings:
​

To summarize our project, we developed a persona. Palema, is a target user of our platform, shaped based on insight we collected through our user research: 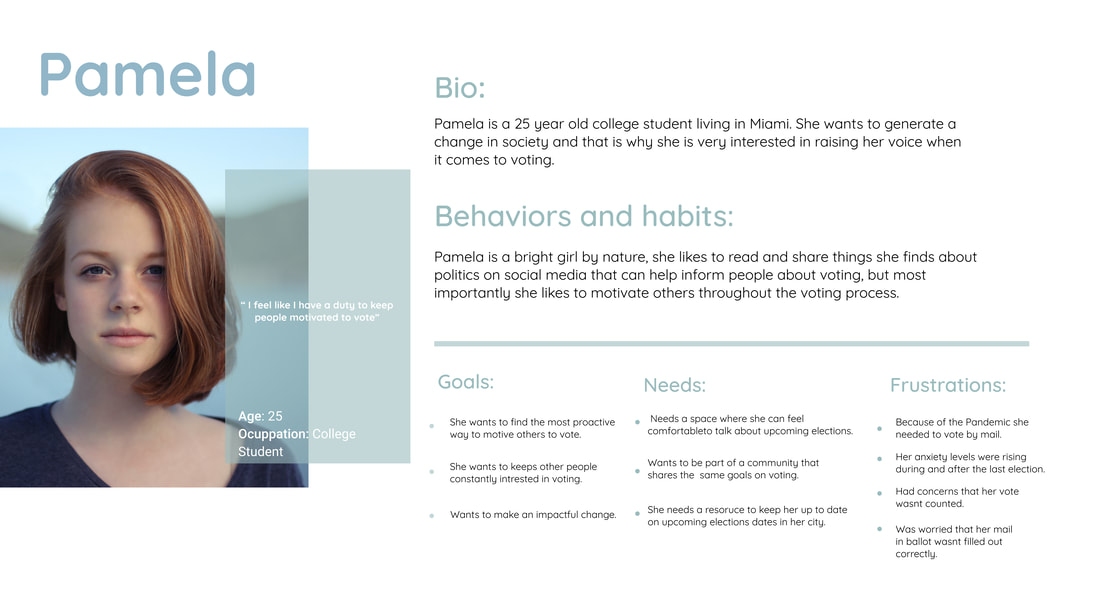 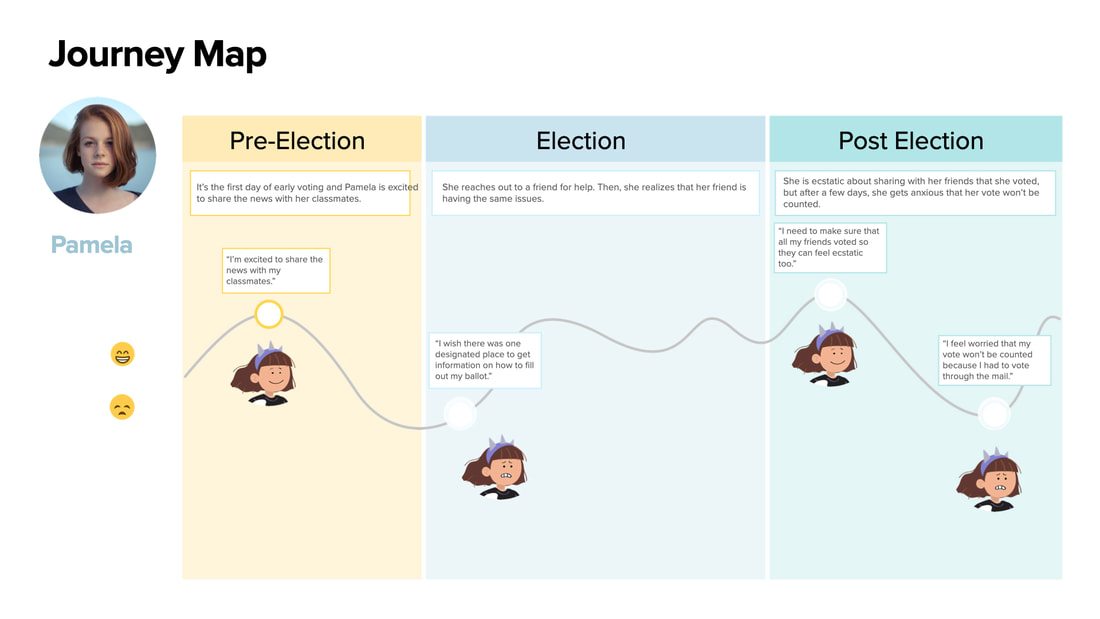 Our user research confirmed that Voting is one of the building blocks of a Democratic society. However, due to the stressful nature of elections, not everybody has the motivation to actually vote. As a result, Pamela feels that it is her duty to help motivate her friends and fellow students to go out and vote. Based these additional insights, we revised the scope of our project to the following:
​
"How might we help Pamela find ways to engage with her friends and motivate them to vote?"
​ 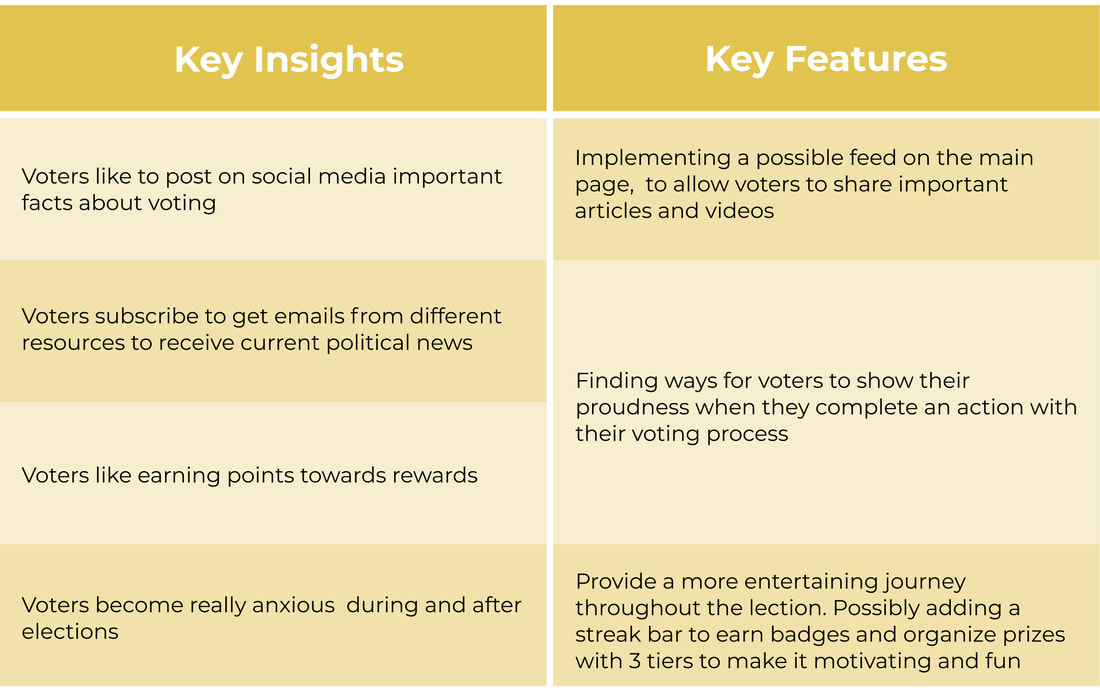 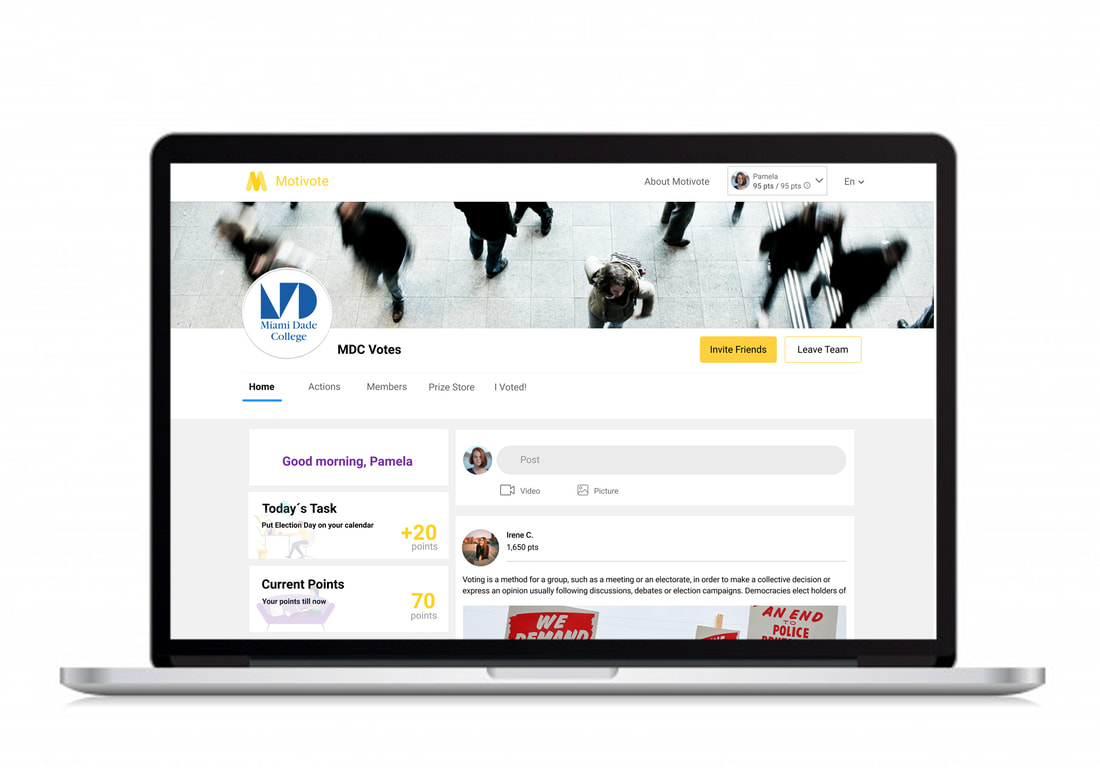 Before getting to the design phase, we conducted a usability testing based on an existing website, we asked our voters to narrate their decisions and observed their body language while completing each task., then, we asked voters to rate the ease of usability.

You’re a student of Miami Dade College. It’s time for the next election and you feel that it’s important for you to help motivate students at your campus to go out and vote.
Task 1: Check how many tasks your friend, Victoria Z., has completed towards their
voting plan.
Task 2: Get yourself ready to vote by choosing the way you will be voting in this
election.
Task 3: Let your friends know that you voted by sharing a selfie..
Task 4: Use your points to redeem a reward of your choosing.
​
After reviewing our notes, we created a scorecard to see how our usability test compared among our different participants. It also helped us come up with clear takeaways and potential action steps for our next iteration.

After the design studio, we move forward to building mid-fidelity wireframes. This gave us a more accurate view of our planned layout and the details around how things will work based on the insight into features we prioritized. These frames are some of the screens from the Mid-Fi Prototype that we made: 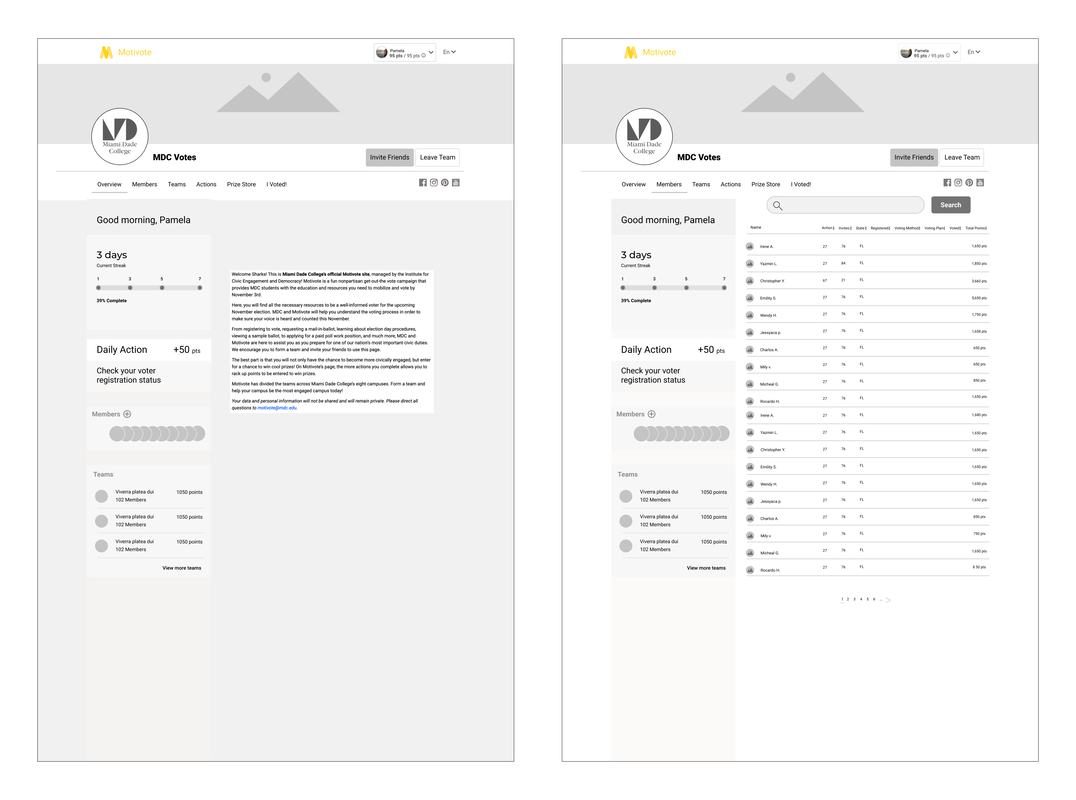 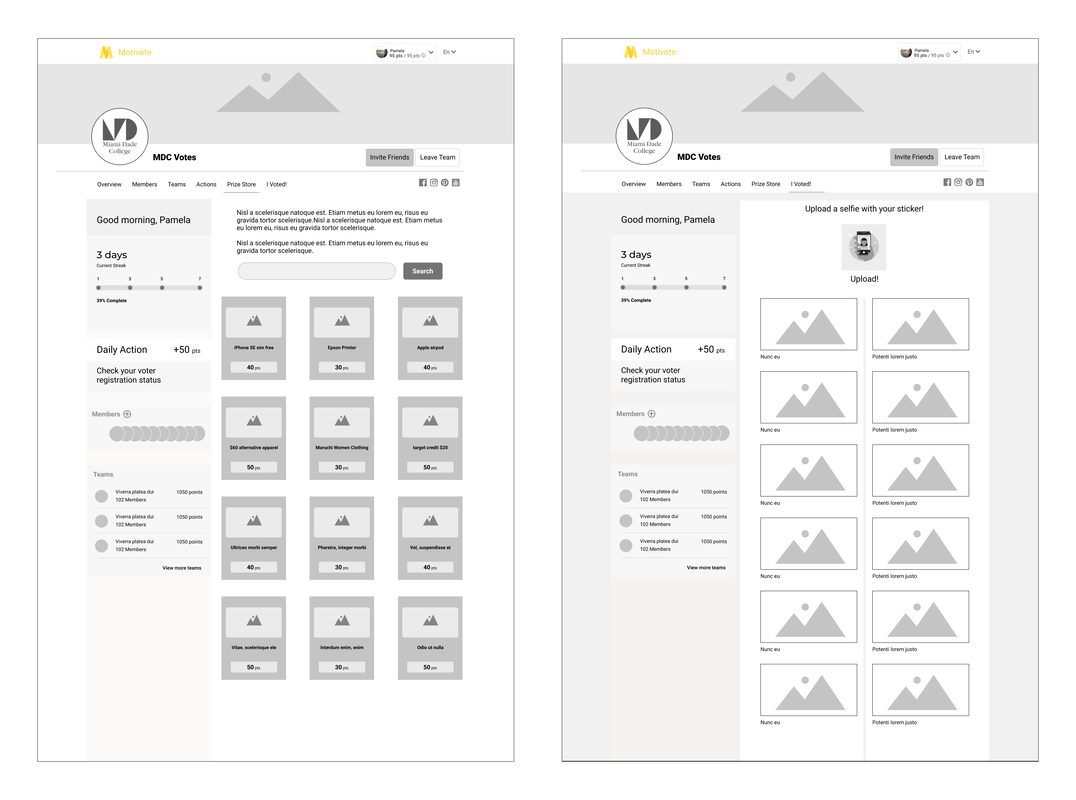 Mif-Fi Wireframe
Next round we made a Hi-fidelity prototype based on the result of mif-fi usability testing. Here is a comparison between our proposed design with the existing website: 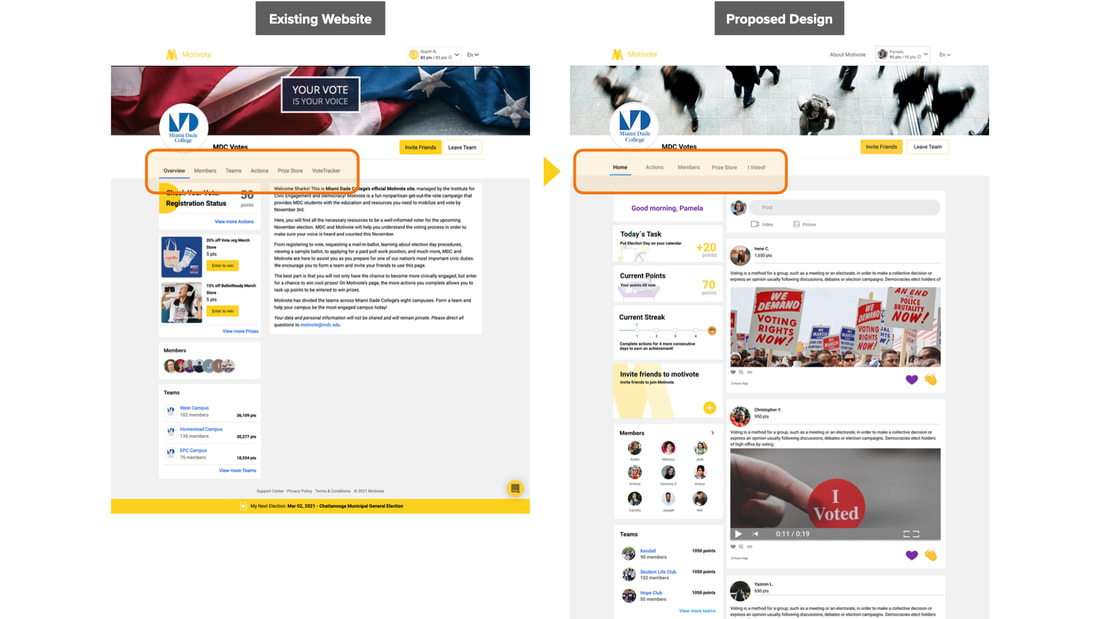 Landing Page
The very first problem that we realized during the usability testing was the main navigation bar, some categories did not make sense to users, for example during usability testing we realized that people were associating the “team” category and “members” the same, and it caused confusion. To facilitate the users experience throughout the dashboard we eliminated the teams page. Also, we changed the “Overview” category to “Home” because based of usability testing people were referring “overview page” as “home”  so we found it was more intuitive for this page to be renamed it. In “Vote tracker” category where people upload a selfie to show their social accountability, there was no connection between uploading a selfie and name of category "Vote tracker" so we changed it to “I voted!”  to bring a connection to uploading the selfie! 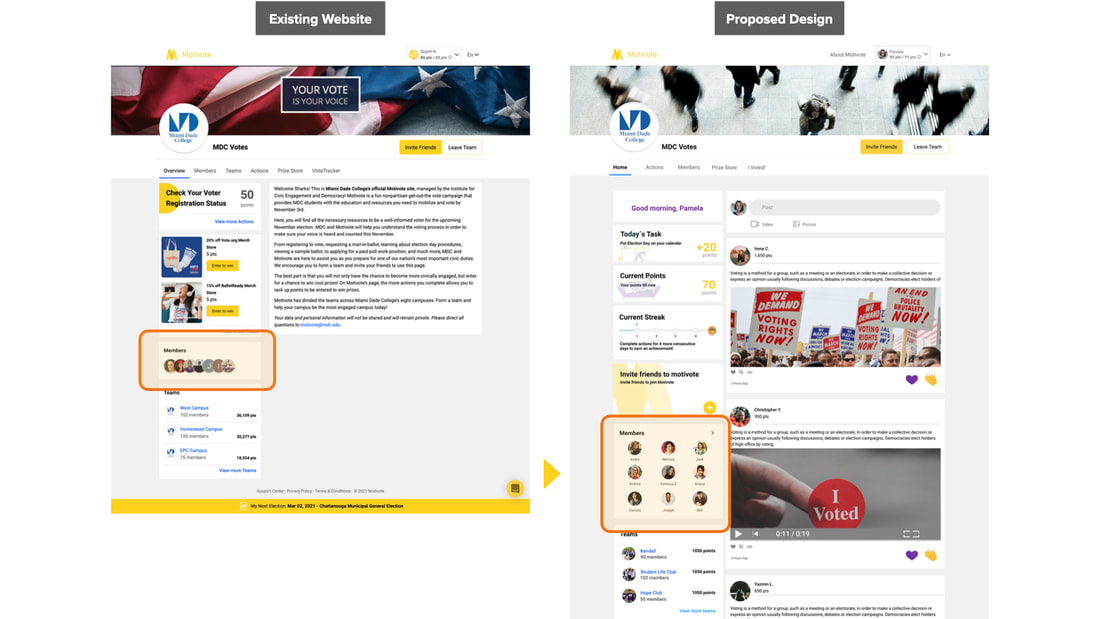 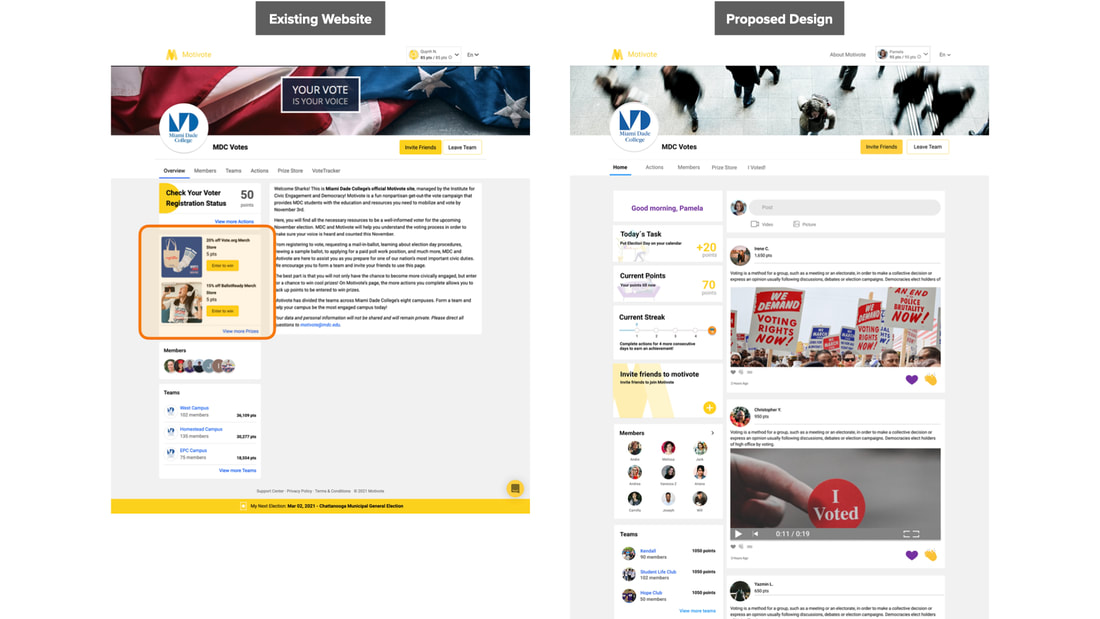 Landing Page
For most users the prize section was more like an advertisement so we moved that, instead we added the 3 new ways to engage to the platform 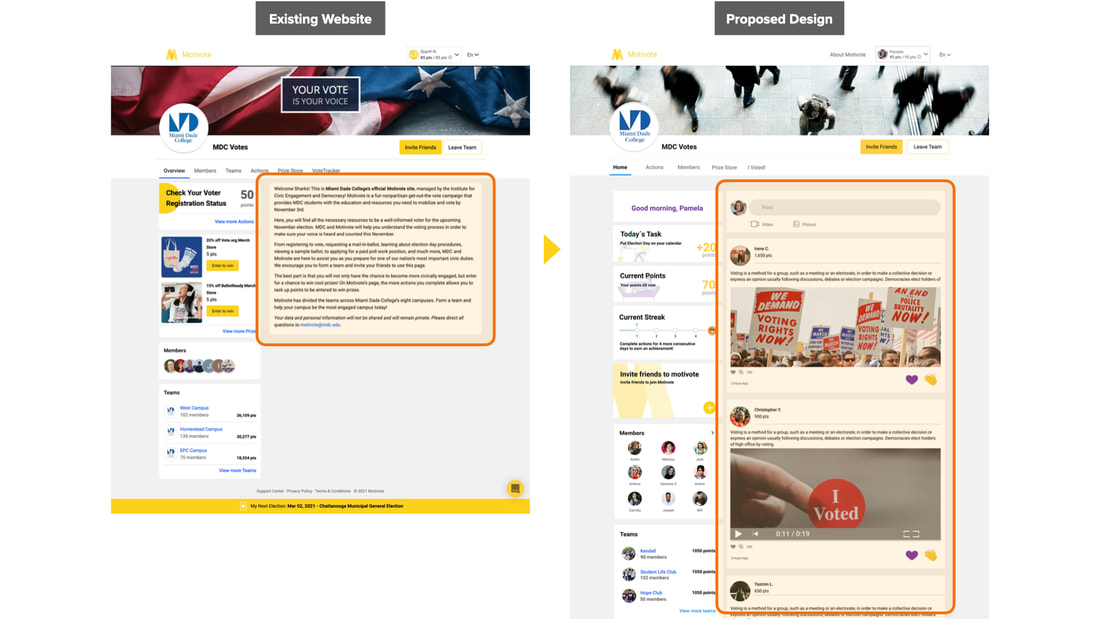 Landing Page
As you can see on this slide, the landing page has a hefty amount of text, which we changed it to the feed. 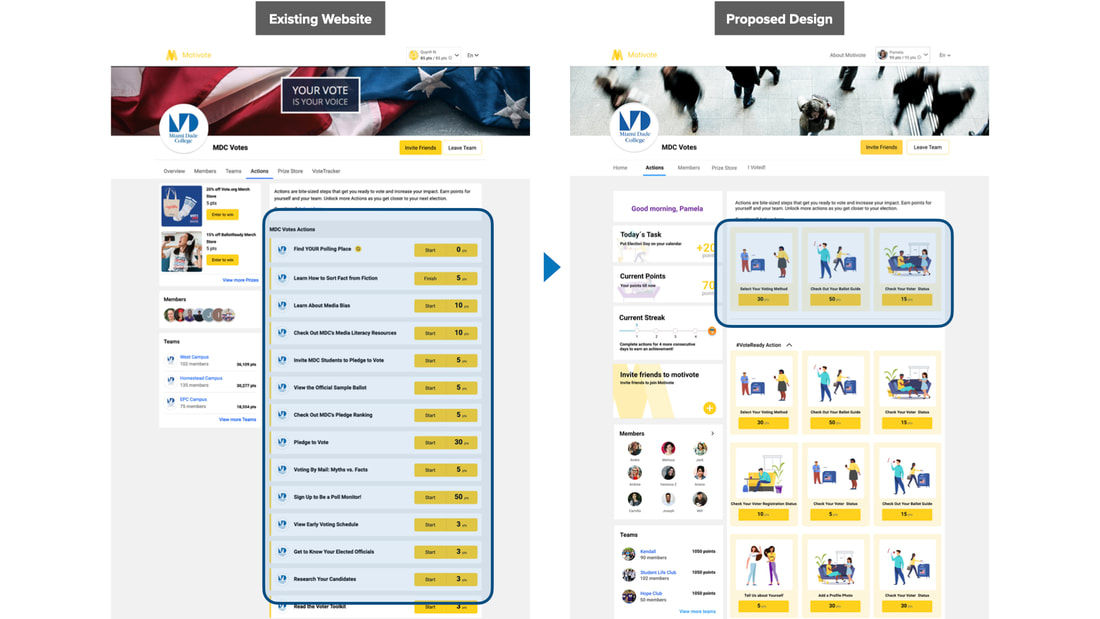 Action Page
Here on action page, the layout was overwhelming  and it was difficult to reaching options after long scrolling.  we put Actions that are critical to the voting process right on top so that voters can instantly see them without having to scroll down, We also Changed the layout for each action from being a list to a card to make it intuitive and easier for voters to see the individual action also added illustrations to make it more fun! 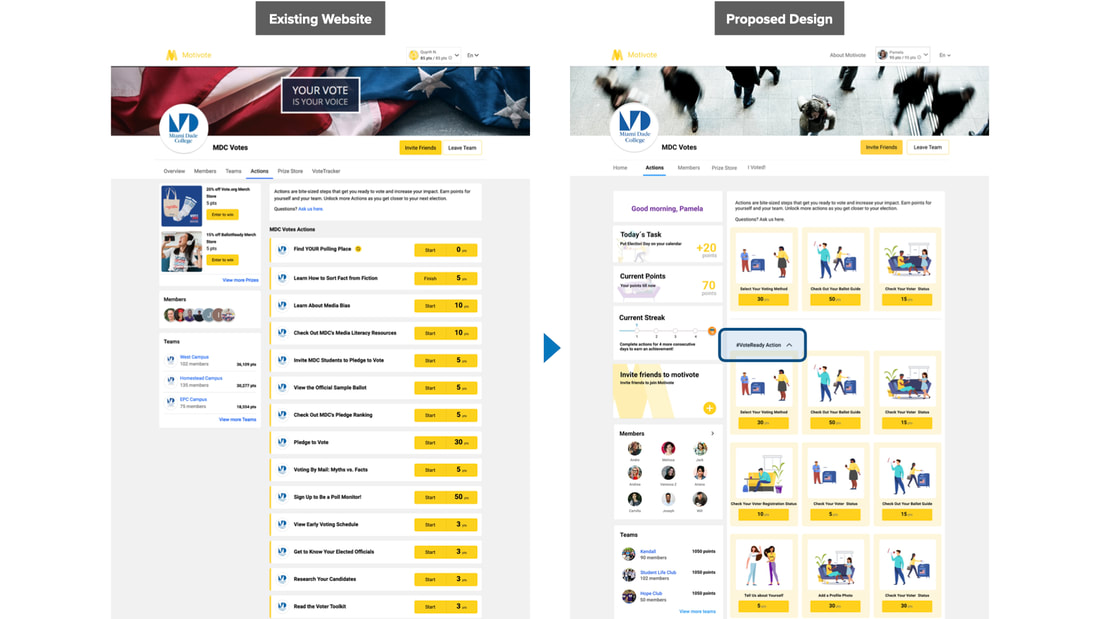 Action Page
We also added a chevron dropdown button to allowing the voters to control the actions they want to see. 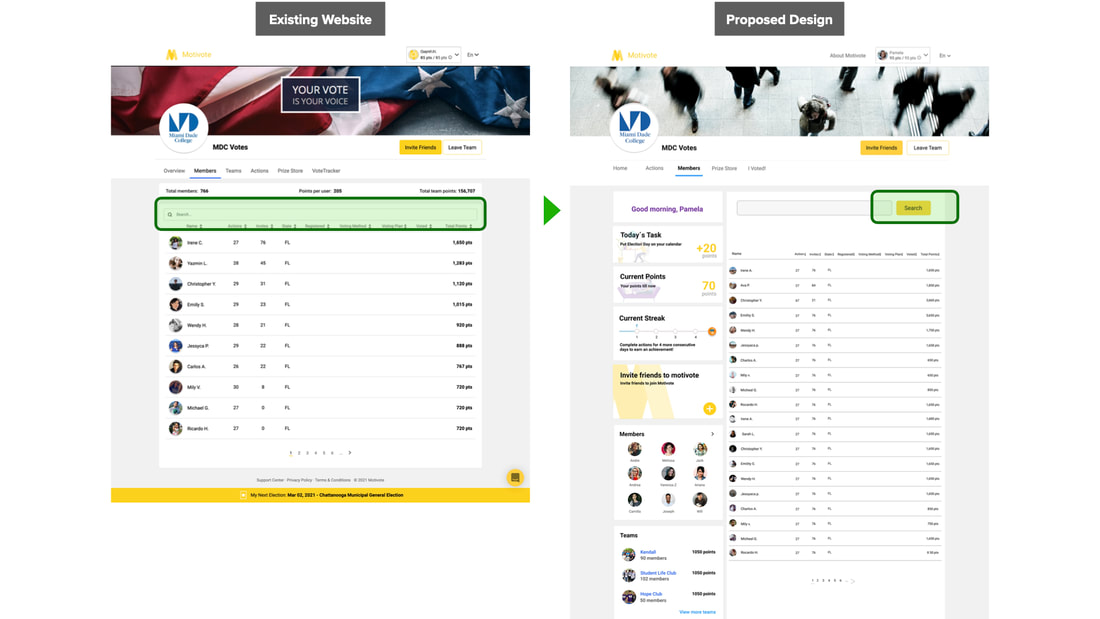 Member Page
For the member page the search bar was not recognizable, we added the search button to ease the search experience for voters. We also added a clear sort bar to make it easier for voters to filter through members and Implemented a voter profile card to allow members to see each others achievements. 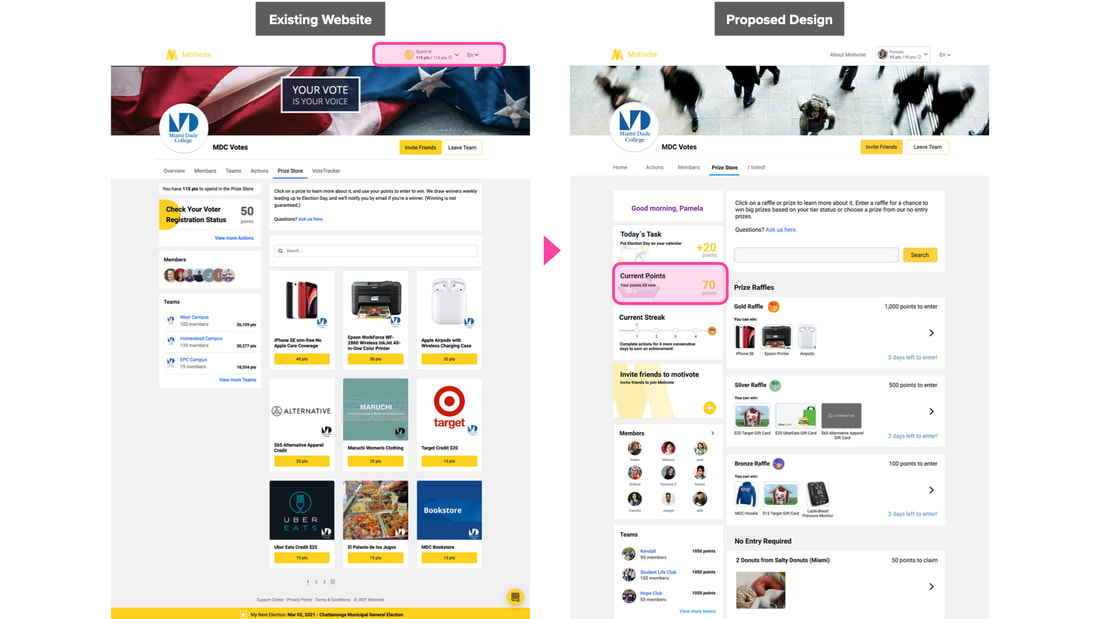 Prize Store Page
In prize store page, in the existing design users were not able to find their current points to know which prize to redeem. we added the current point on the sidebar so they can keep track of their points. 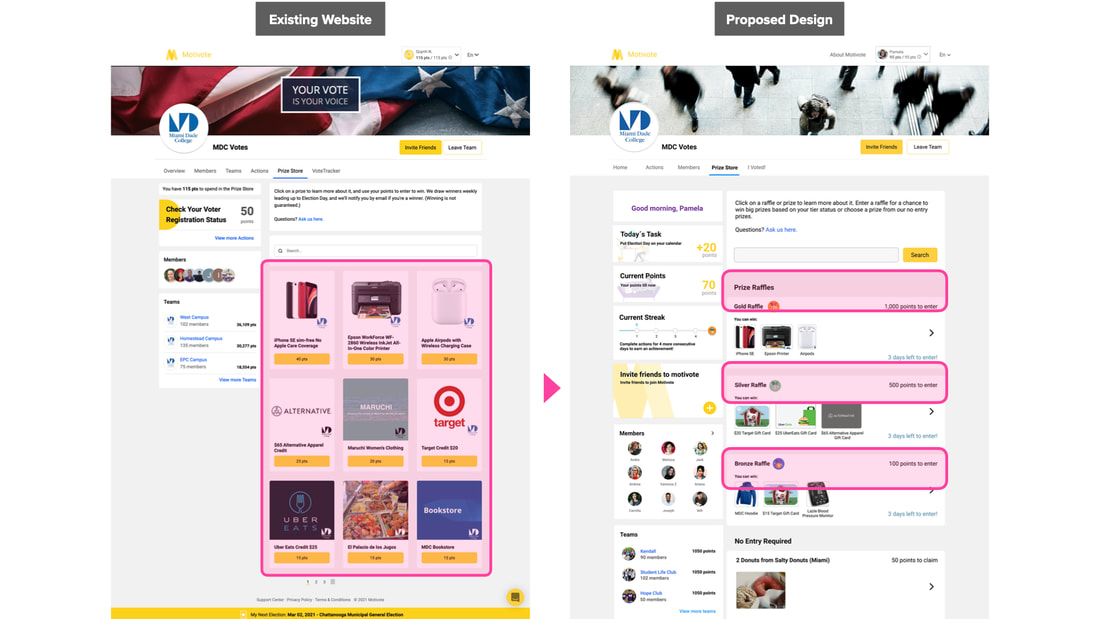 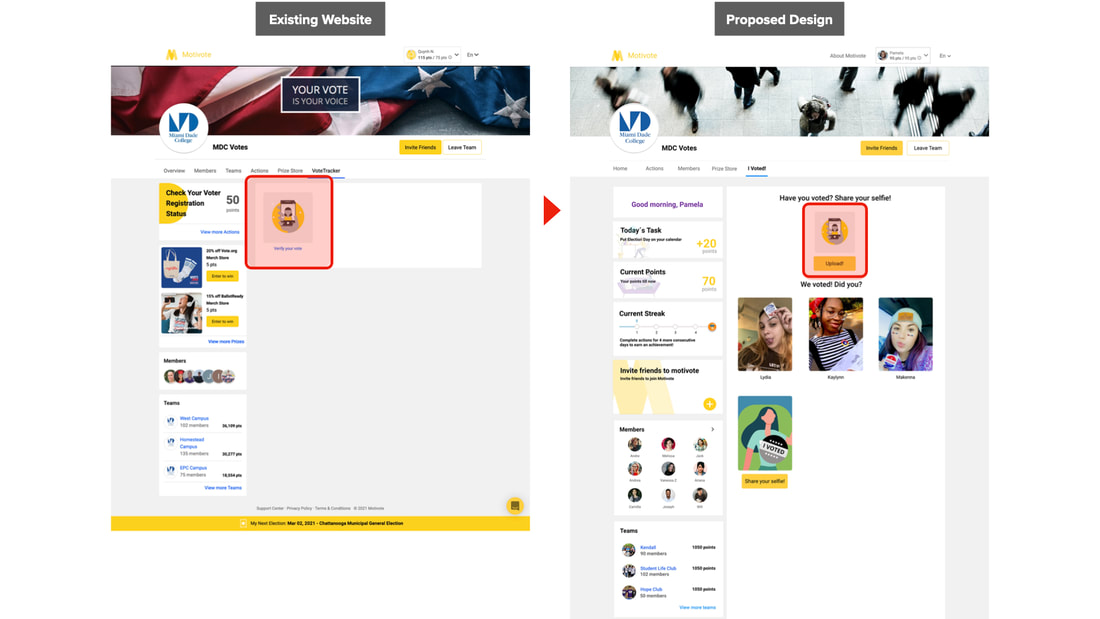 I Voted! Page
We changed the placement of the illustration from the left to the center in order to make it match with the visual of the gallery.

Based on the proposed design we ran another round of usability testing, you can see the result of the score card: 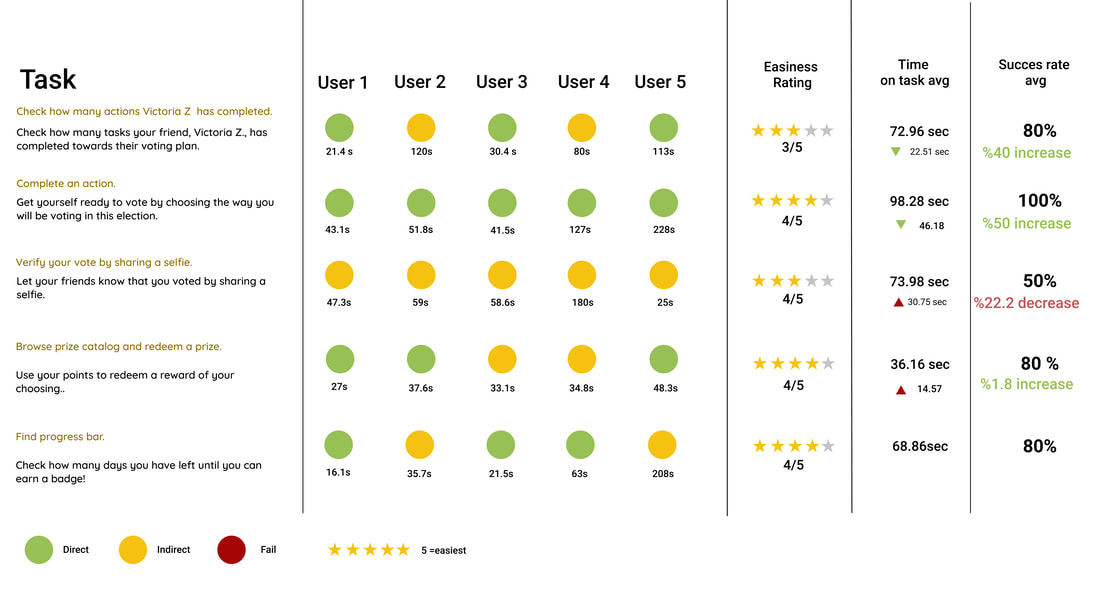 Comparing to the final round of usability testing with the existing website,  there is an improvement in general in terms of directness of performing the task, except the third task which was about sharing the selfie. The reason was that participants assumed they could post their selfie on the feed on the homepage due to the photo iconWe also had decrease in terms of time on performing the task, except the third for the same reason and forth tasks because participants wanted to check their points first, but then immediately went to claim the prize afterwards and it took longer time for them.

The results from our data show that we are heading in the right direction. There a few recommendations that we have before the hand off to developers.
Powered by